Our Year in Music

The Ferris Burtis Foundation is proud of the work being done by the five young musicians it has sponsored this season. All were winners of Foundation grants to help in their studies and careers.

The following are reports received from the five young musicians detailing their activities this past year and how the Ferris Burtis Foundation has aided them in their studies and careers. 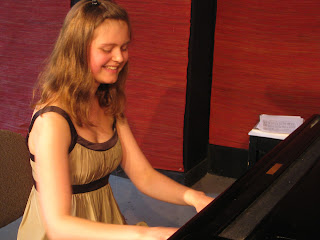 Gabriella Makuc. Over the past year, Gabi's studies of music at Lawrence University have been quite diverse. She has just returned from her choir's performance at the North Central ACDA convention in Des Moines, Iowa. Gabi both sings in and accompanies Cantala Women's Choir. She recently performed the Grieg C minor sonata for violin and piano, and participated in a studio recital of the complete Goldberg Variations. Aside from piano performance, Gabi has interests in music education and sacred music, and is beginning to study organ. She conducted a children's choir performance and taught a classroom music lesson for the first time this past fall. Over the summer, she attended a Dalcroze Eurythmics intensive at the Lucy Moses School in New York. Gabi enjoys bringing music into the community- she currently accompanies a children's church choir and an adult church choir, and has volunteered in teaching music at the local Boys and Girls Club. This spring, she is organizing a regular concert series for a local nursing home. Gabi enjoys the academic side of music at Lawrence. This winter, she helped to organize a music theory symposium for the study of Tchaikovsky's Sixth Symphony. She will continue to pursue studies in music theory, music history, and the connections between religion, myth and music. She sincerely thanks the Ferris Burtis Foundation for supporting her studies. Without the financial aid of the fund, this rich Lawrence experience that combines liberal arts and music would not be possible for her. 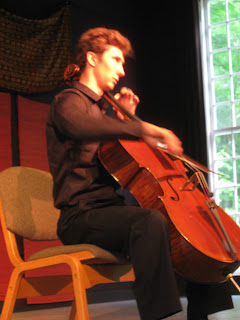 21 year-old cellist, Julian Müller started playing the cello at age five. He is currently studying at the Cleveland Institute of Music with Sharon Robinson. Past teachers include Ronald Feldman, with additional studies received from Georg Faust.

In both 2013 and 2012 Müller was a member of the New York String Orchestra Seminar (NYSOS) performing in Carnegie Hall. 2013 was the 45th Anniversary of the Seminar and it was the 20th anniversary of director Jaime Laredo leading the orchestra, making it a special year with NYSOS alumni (who hold distinguished positions in major orchestras around the world) performing alongside the student artists. Soloists this year included, Leon Fleisher, Bella Hristova, and the Johannes Quartet, and in 2012 Jonathan Biss, Anthony McGill and Cicely Parnas.

This past fall Müller became an assistant artistic mentor at the Chamber Music Connection in Worthington, OH, a program dedicated to the study of chamber music for ages 5-18, where students can discover their musical potential and flourish through studying and performing with peers and nationally acclaimed artists. Müller plans to continue teaching, coaching and collaborating with the program for many years to come.

Müller was a member of the Berkshire Symphony from 2008-2011. Soloists with the Berkshire Symphony have included: Peter Serkin, Miriam Fried, Adam Neiman, Mihail Jojatu and Haldan Martinson.
Last summer Müller attended the Young Artist Program at Yellow Barn and the Caroga Lake Music Festival. In the summer of 2012 Müller was a young artist at the Manchester Music Festival. In past summers Müller has attended Meadowmount Music School, studying with Melissa Kraut and Hans Jørgen Jensen, and the Kinhaven Music School.

Hailed for his dazzling command of the violin and its repertoire, as well as a communicative immediacy

that harkens back to the legendary Romantic
masters, Russian-American violinist
Yevgeny Kutik has become a highly sought-after artist on the concert stage worldwide.

In his German debut with the WDR Rundfunk Orchestra, Yevgeny “enraptured the crowd” (Der Westen) with his performance. Of his New York City orchestral debut with the Riverside Symphony, The New York Times said his violin projected “an old-fashioned rhapsodic style, which was magnified
by (his) rich, sweet tone.” Yevgeny’s other recent performances have included highly successful appearances with the Tokyo Vivaldi Ensemble in Japan, the world-premiere performance of the concerto Versus by Ron Ford with the Tanglewood Music Center Orchestra, which received praise from both The New York Times and The Boston Globe,
and a return appearance with the Boston Pops and Keith Lockhart. As a recitalist, he has been
presented by the Phillips Collection in Washington D.C., National Arts Club in New York City, Dame
Myra Hess Series in Chicago and in Europe at the esteemed Ludwigsburger Schlossfestspiele
(Germany) and Verbier (Switzerland) festivals.

In his 2011-2012 season, Yevgeny Kutik was
featured in debuts with The Riverside Symphony at Lincoln Center’s Alice Tully Hall, Washington DC’s Embassy Series, Germany’s Norddeutsche Philharmonie Rostock, The East Texas Symphony Orchestra, and a residency at the University of Massachusetts Amherst, performing recital and orchestra programs, as well as conducting a masterclass.

He made his Prague debut at the Lobkowicz Palace
at the invitation of Prince William Lobkowicz. Mr. Burtis and the Ferris Burtis Foundation made this concert possible because of their personal
relationship with Prince William (13th Prince Lobkowicz).

Yevgeny continues his close association with the Jewish Federations of North America Speaker’s Bureau, annually performing throughout the United States to raise awareness and promote the
assistance of refugees from around the world, a
cause to which he is particularly dedicated.

Yevgeny first made his debut with the Boston Pops and Maestro Keith Lockhart in 2003 playing the Sibelius Concerto as the 1st prize recipient of the Boston Symphony Orchestra Young Artists Competition. He has also been awarded a 2006
Salon de Virtuosi Grant as well as the 2006 Tanglewood Music Center Jules Reiner Violin Prize.

Connecticut Magazine calls soprano, Katie Weiser, “Golden Voiced.”  Originally from Litchfield, CT, Miss Weiser is currently pursuing her Masters degree in vocal performance at the Setnor School of Music at Syracuse University where she studies with voice teacher, Janet Brown, and voice coach, Fred Karpoff.  She received her B.A. in music from Smith College
and was the first vocalist at Smith to be awarded the Concentration in Performance.


Miss Weiser began her classical music education at the age of seven when she joined the semi-professional children’s choir, Chorus Angelicus, and toured internationally under the direction of Paul Halley. She has also appeared in the main stage productions at TriArts Sharon Playhouse since 2000 and has won “the best featured actress in a musical” award from Seven Angels Theatre for her performances as Kim in Litchfield High School’s Bye Bye Birdie and Miss Sherman in Fame. In March of 2009, she was awarded the Burton O. Cowgill award from the New England Music Festival, which is given to the musician who has been a member of the festival for all four years and who has received the highest score in the Solo and Ensemble Festival adjudications.  In her junior and senior year of high school, she won first place in the NATS advanced high school division competitions.


During her career at Smith College, she studied voice privately with Herbert Burtis, was a member of the Glee Club, Chamber Singers, won the Smith College Concerto Competition as a sophomore, attended the Bel Canto Institute in Florence, Italy, performed as Suor Genovieffa in Puccini’s Suor Angelica, and appeared as a guest soloist with the New York City Ballet.  She was also one of six students selected to represent Smith College in the documentary, “Women of Promise.”


Since coming to Syracuse, Miss Weiser has been a guest soloist with Central New York’s Premier Wind Ensemble (“Central Winds”), she attended OperaWorks’ Winter Intensive Opera Program in Los Angeles, she won the University’s Aria and Concerto Competition, and she has also been an active member of the Syracuse Oratorio Society and Baroque Ensemble.


Upcoming major performances for Miss Weiser this spring include the role of Lucy in Menotti’s opera, The Telephone, a performance at Lincoln Center with Chorus Angelicus under the direction of Eric Whitacre, a solo graduate recital, and the Aria and Concerto Competition performance.  This summer, she will appear as Cosette in Les Misérables at TriArts Sharon Playhouse before she pursues further operatic study with soprano, Dorit Hanak, at AIMS in Graz, Austria.


Miss Weiser would like to thank the Ferris-Burtis Foundation for their continued support, which has made it possible for her to pursue a career in voice.

Fritz Herrmann is a freshman at Baldwin Wallace University in Berea, Ohio where he is studying organ performance with Nicole Keller.  He has studied


piano for nine years, alto saxophone for eight years, and organ for four years. Fritz  is all about music,


and plans to be a musician. He has been a substitute organist at several local churches, and has played as keyboard entertainer at a local restaurant, at art openings, and at the farmers market.The Ferris Burtis Foundation has helped him with his college tuition.

Posted by Herbert Burtis at 6:33 PM

Herbert Burtis
I have given my blog the name of my first ancestor, Pietro Cesare Alberti, who came to these shores in 1635. He was the first Italian-American. I have had an international career as a pianist, organist, and harpsichordist. As a vocal teacher I have taught at Harvard University and Smith College as well as having a studio in New York City. I now have a vocal studio in Chicago.I have performed throughout the United States and in Denmark, Germany, Austria, France. Barbados, St. Vincent, Trinidad,Tobago, and Bermuda. I made my Carnegie Hall debut in 1967 and have appeared numerous times in Carnegie Recital Hall, Weill Hall, and Steinway Hall. As Director of the Ferris Burtis Music Foundation, my mission is to help young classical musicians in their education and careers. For twenty years I was the voice teacher for Lorraine Hunt Lieberson. Seven of my students have sung at the Met, I may be reached at roodhill@verizon.net. www.hburtis.com http://ferrisburtisfoundation.blogspot.com http://albertitalks.blogspot.com