Yevgeny Kutik has just completed a concert tour in Europe which included three performances of the Tschaikowzky violin concerto with the Norddeutsche Philharmonic Orchestra  in Rostock, Germany and a solo recital at the Lobkowicz Palace in Prague Castle, Czech Republic. He has received rave reviews in both locations.

Review- 'The young soloist presented a violin show par excellence with his breathtaking virtuosity, fine dymanic shadings, as well as melodic and rhythmic agility. After the final movement, he received,-now as appropriate- thunderous final applause'
-Ostsee-Zeitung

Thanks to Andrea Winzer for the translation.

This tour was made possible in part by a grant from the Ferris Burtis Music Foundation. 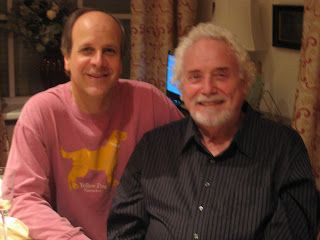 When I was in Prague visiting Will Lobkowicz and his family last spring, I brought up the possibility of having Yevgeny perform in the magnificent Lobkowicz Palace which sits atop the butte which is Prague Castle in the center of the city. Will is the thirteenth Prince Lobkowicz. His family has been involved sponsoring musicians for several hundred years, including Mozart, Haydn, and Beethoven. 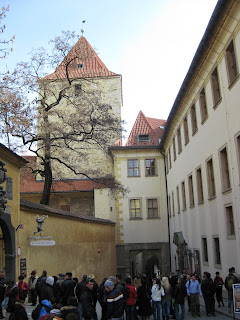 The Lobkowicz Palace is the light colored building on the right and in the center of the photograph.

Will and I discussed the idea of having Yevgeny perform there and I told him that the Ferris Burtis Music Foundation would help fund Yevgeny's visit. This is the sort of thing the Foundation does with the five extraordinary young musicians we are helping at the moment. 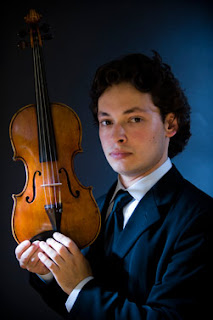 Yevgeny will be joined by Julian Müller, 'cellist, Morwena Boyd, guitarist, Kathleen Callahan, soprano and Timothy Bozarth and Anne Chamberlain, pianists in the Benefit Concert being held to raise money for the Foundation on June 10th at the Sandisfield Arts Center.

The Ferris Burtis Music Foundation will present its second annual Benefit Concert on Sunday, June 10th at 4:00 p.m. at the Sandisfield Arts Center on Hammertown Road in Sandisfield, MA. The Foundation, established through the Berkshire Taconic Foundation of Sheffield, MA in 1987 by the late John Ferris and by Herbert Burtis, provides grants to worthy young classical musicians to help in their education and care

Last year the Foundation granted over $9,000.00 to five wonderful young performers, Yevgeny Kutik, violinist, The Elektra Ensemble, Jullian Müller, and Morwena Body. Jullian and Morwena are each finishing their first year in Music Schools in Indiana and Michigan. Yevgeny is performing internationally, including concerts this Spring with the Rostock Germany Symphony and at the Lobkowicz Palace in Prague, Czech Republic. The Elektra Ensemble is taking some time off while the 'cellist, Melissa Morgan, recovers from an arm injury. 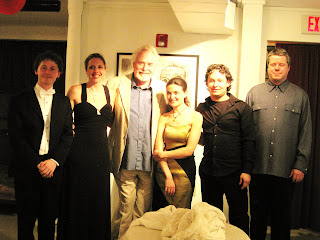 The performers from last year's Benefit Concert
They will all be performing at the concert on June 10th. reservations are $20.00 each. Make checks payable to 'Ferris Burtis Foundation', and send them to Herbert Burtis, 53 Rood Hill Road, Sandisfield, MA 01255. Any gift over the cost of the reservation is tax-exempt. Please include your email address for my to respond to your gift.

Any amount over the cost of the reservation is tax-exempt. We encourage you to give generously to help the Foundation continue their work with talented young musicians.
Posted by Herbert Burtis at 5:58 PM No comments:

Herbert Burtis
I have given my blog the name of my first ancestor, Pietro Cesare Alberti, who came to these shores in 1635. He was the first Italian-American. I have had an international career as a pianist, organist, and harpsichordist. As a vocal teacher I have taught at Harvard University and Smith College as well as having a studio in New York City. I now have a vocal studio in Chicago.I have performed throughout the United States and in Denmark, Germany, Austria, France. Barbados, St. Vincent, Trinidad,Tobago, and Bermuda. I made my Carnegie Hall debut in 1967 and have appeared numerous times in Carnegie Recital Hall, Weill Hall, and Steinway Hall. As Director of the Ferris Burtis Music Foundation, my mission is to help young classical musicians in their education and careers. For twenty years I was the voice teacher for Lorraine Hunt Lieberson. Seven of my students have sung at the Met, I may be reached at roodhill@verizon.net. www.hburtis.com http://ferrisburtisfoundation.blogspot.com http://albertitalks.blogspot.com